Another Copper Bullet in the War Against Utility Scams 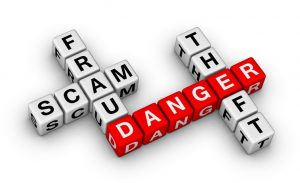 Did you participate in Facebook’s recent “10 concerts” meme? You know the one — Facebook users were invited to list nine concerts they actually attended and one they didn’t. Their FB friends were asked to guess which one was not, in fact, attended by that person. The meme swept through FB-land like wildfire, drawing millions of responses in a matter of days.

For my Facebook friends that participated in that meme (one person I know listed 50 concerts he had gone to in his life), I learned a lot about their musical tastes. Scammers may have too. If the password to your email, bank account or credit card is some variant of “Pink Floyd” or “Brad Paisley,” you may soon be the victim of a scam. 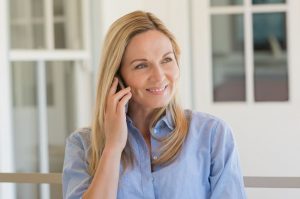 Hopefully you were not a victim of the “Can you hear me?” phone-based scam, which started making the rounds in early 2017. This is the one where you receive a call and the caller starts by asking, “Can you hear me?” When unsuspecting victims answered “yes,” they exposed themselves to all sorts of trouble in their digital and financial world.

More recently, we have the WannaCry ransomware scam, which affected tens of thousands of computers in over 100 countries. Hopefully you were not hit with this.

Just last month, word got out about the newest cyberattack, where hackers were able to embed malware directly into social media posts. “While corporations and government agencies around the world are training their staff to think twice before opening anything sent by email, hackers have already moved on to a new kind of attack, targeting social media accounts, where people are more likely to be trusting,” The New York Times reported.

Great, next the scammers will find a way to get directly inside the fillings in my teeth.

Cyber attacks and scams work because scammers are masters of social engineering, the art of taking bits of information someone provides and using it against them. It’s not that the victims are dumb, it’s that the scammers are playing on another level.

The formation last year of Utilities United Against Scams (UUAS) is an important step in the right direction of fighting scams on a coordinated front. UUAS is working collaboratively with its 100-plus members, and telecommunications providers and law enforcement agencies, to combat utility scammers across North America. This is a good and necessary fight, one eminently worth waging. 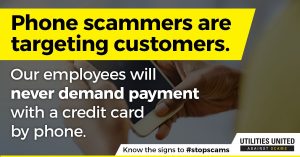 UUAS’s membership includes electric and gas utilities, electric cooperatives, electric and gas trade groups across North America. The group launched its first awareness campaign last November, resulting in articles in Forbes, Chartwell and numerous other print and broadcast news outlets. The group also created a Twitter handle, #StopScams, to facilitate the exchange of best practices on preventing and combatting scams. UUAS also set up a YouTube page with a video of customers who were scammed.

As we enter the summer high-electric bill season, I’m sure UUAS, utilities and electric cooperatives across the country will be on high alert. If electric and gas providers have not already joined UUAS, I recommend they join. There is no membership fee, and there are many benefits to be gained. Last month CS Week had both a break-out session and an all-day workshop on UUAS’ efforts.

“Utilities have been waging customer-awareness campaigns for years, but they weren’t working,” Jared Lawrence, Duke Energy’s vice president of revenue services and the leader of UUAS, told me before CS Week. “We needed a larger, more concerted effort. Since all utilities are experiencing the same thing, we can be more effective if we work together.” Hence, the birth of UUAS. 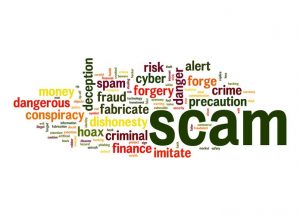 The formation of UUAS shows electric and gas providers are trying to up their game. There’s a lot to be gained through concerted, coordinated action. But there is another step utilities and electric co-ops could take, in addition to being active participants in UUAS, that could help protect their customers and members from utility scams.

Utilities and electric cooperatives could shrink the pool of potential scam victims by educating their customers to become even better, more informed digital consumers. Our digital world contains threats as well as benefits that were hard to imagine five or ten years ago. Why not provide information that inoculates customers and members against the digital threats they face, whether it’s over the internet, via texting, when posting to social media or even answering the phone?

A discount men’s clothing chain in the East Coast for decades flourished under the slogan, “An educated consumer is our best customer.” I’ve always thought that was a great value proposition, regardless of what business you were in.

UUAS and utilities are working to do just that. But winning the battle against utility scams requires “both/and” thinking. There is no single solution that will win the war, no silver bullet that can fell all scammers. But here is a copper bullet, if you pardon the violent imagery, that, when combined with vigilant communications, could yield improved results.

Earlier in my career, I worked at a publicly owned utility that supported free workshops organized by human-services groups where residents could acquire essential office computer skills, such as Outlook, Word, Xcel and PowerPoint, that could help them land a career position and get them out of poverty. That effort was very successful both for the customers that participated as well as for the utility.

Communications Tip: By partnering with local human-services groups to educate customers about the digital dangers they face, utilities will be taking an  important, personalized step to fight utility scammers.

The benefits to participants were obvious: better jobs meant upward economic mobility and greater economic security. What was in it for the utility?

The utility, which I will not name, benefitted because this program was tangible proof of its commitment to improving the lives of its customers and residents. Rather than start at the top, by putting its name on a shiny new sports venue, in the expectation that the new venue would generate local economic benefits, the utility I was proud to work for started at the bottom, by giving those in need the tools that could help them bootstrap themselves up the economic ladder.

There is an organization, headquartered in Denver, which aims to do just what I’m advocating. Working with human service organizations, this group, WorkLife Partnership, provides “upskilling services” to unemployed and under-employed people. That’s a trendy way to say they’re providing people in need with the skills that will help them start their upward climb up the economic ladder. Backed by some foundation money, the group is expanding nationally.

“Upskilling” is a trendy way to say they’re providing people in need with the skills that will help them start their upward climb up the economic ladder. Backed by some foundation money, the group is expanding nationally.

This group is probably looking for a few good partnering organizations. Will your utility or cooperative step up? WorkLife Partnership isn’t the only such organization. Here are two others: Fresh Start Women’s Foundation and Arizona Women’s Education and Employment. Doubtless there are hundreds if not thousands of organizations across the country trying to lift the economic prospects of their participants.

Electric and gas providers could help address a persistent need in their communities about the subtlety of fraud and the complexity of risks in our digital economy.  Scams are part of living in today’s modern, connected world. Sometimes people need to be reminded not to engage in the Internet meme of the day. On other occasions, people need to hear about the potential dangers of clicking on suspicious attachments or URLs in an email or even posting to social media.   If the scammers have succeeded because they have been nimble and clever, utilities and electric cooperatives need to become even more nimble and clever to beat the scammers at their own game.

To utilities and cooperatives who might say public outreach and education on digital threats to consumers isn’t part of our mission, I have two responses. The immediate, self-interested one is, if your customers and members have been scammed, they have less money to pay their real bills, including their utility bills. So providing this education could lower utility bill delinquencies and disconnections. 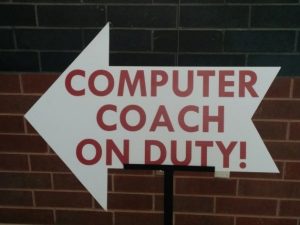 The broader, more strategic response is, educating your customers is an opportunity to tangibly improve the quality of their lives, which nearly all utilities say they want to do.

There is an unmet need in our communities to do just that. And it’s a great opportunity to do well while doing good.

I volunteer at a local human service organization where I see the need some at-risk members of my community have for basic human services. Many lack fundamental work skills or are unfamiliar with workplace expectations. Many have language, cultural or physical barriers that make them vulnerable to scams. That suggests some of these workshops will have to be offered in a language other than English. The human service organization I volunteer at is hosting WorkLife Partnership workshops. My church is doing something similar. 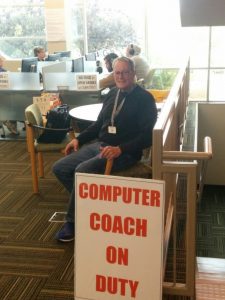 The other day I walked into my library in Lafayette, Colorado, and saw a sign for a “computer coach,” who helped people get a better handle on the digital aspects of their lives. On weekday mornings, volunteers at my local library offer drop-in coaching on computers and smart phones. Dave (left), one of the computer coaches, said most of the people seeking help are more mature folks who are flummoxed by the functions in their smartphones or personal computer applications.

If your utility or electric cooperative is providing digital coaching to customers or members, please email me so I can compile a list of forward-thinking energy providers. I would love to write a follow-up post showing what energy providers are doing to inoculate their customers and members against the digital threats they face.

In the EEC Subscriber Exclusive that you will receive later this month, I will discuss how utilities and cooperatives are fighting the malware and ransomware threats to their business by acting strategically and proactively.