The Care and Feeding of the News Media

What do the news media want? Sigmund Freud spent a lot of time a century ago pondering a variant of that existential question – “What do women want?” Eventually, he concluded, it was best to ask them. And so it is with the news media, which many of us interact with on a daily basis.

A lot of utility spokespeople used to work on the other side of the fence, reporting, editing and producing news for newspapers, online news sources and radio and television stations. That’s valuable experience that gives those spokespeople a leg up on other media relations professionals who have not logged time as a member of the Fourth Estate.

But being an effective utility spokesperson does not require a stint in the news media. And regardless of whether you toiled in journalism’s vineyard earlier in your career, you can do a fine job if, as Dr. Freud suggests, you ask reporters, bloggers, editors and producers what they want – then make every effort to give it to them in the way they want it.

Before picking up the phone to pitch a reporter, or writing a news release, Ben Tansey recommended asking yourself, “Why do I want publicity for this story?” He told the NWPPA conference attendees, “It’s never been particularly clear to me why utilities want to be in the media. But if you can answer the question of why you want to publicize something, that will help you decide if this is really a story, whether you should pitch it and to which outlet.”

Ben’s comments made a lot of sense. They reminded me of an old saying: “If you want to hunt for zebras, you need to go where the zebras hang out.” If your “zebras” are customers, maybe your utility is better off using the customer newsletter, social media or posting something to their website, and then alerting members of the news media via a tweet, a text, an email or a call.

Communications tip of the month: The news media is a communications and marketing channel, not an end in itself. Getting coverage doesn’t require writing news releases, but it does require understanding what reporters consider “news.” Start there and you’ll save yourself time and effort.

Assuming you have something meaningful to say, there’s a lot of ways to get your news covered by media. Blasting out news releases is not the only way to reach your intended audience. Austin Energy, the well-regarded Texas public power utility, used to email the local news media copies of the customer newsletter about a week or so before it was mailed out to customers. If there was something particular Austin Energy wanted to call to the attention of a reporter, a quick phone call (more likely a voice-mail message) let the reporter know to look for something in their email. 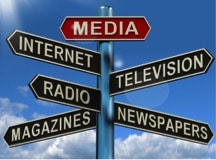 Ben’s point was echoed by Glenn, the TV reporter, who advised utilities to take a holistic view of the communications channels available to them: the news media, social media, website, bloggers and face-to-face encounters. If the goal is to inform your customers, does it really make a difference which channel they received the information from? Be sure to capitalize on the trend to citizen journalism by cultivating stakeholders who take a strong interest in your issues.

“We get gazillions of releases on awards,” Glenn continued. “Since everyone’s getting an award for something, sending me a news release on an award you recently won is wasting my time. So don’t carpet-bomb us with those kinds of news releases. Please understand that there are more and more media outlets today and less and less reporters. We’re all doing information triage all day long. This is a relationship business. Get to know the reporters who cover your beat.”

An audience member (who also used to be a newspaper reporter and editor) recommended spokespeople also get to know the city editors at newspapers. “Typically, city editors have been there for decades,” said Bob Bolerjack of the Snohomish County Public Utility District. “They have valuable institutional knowledge that can offset the transience of reporters.”

In my experience, Bob’s advice also applies to producers and assignment-desk editors at TV and radio stations. The on-air talent may come and go (particularly in small markets, where many reporters start out), but there is far less turnover among the editors who assign stories and the producers who edit and package the stories.

The reporters on the panel agreed social media was a great way to get updates on breaking news like power outage restoration, severe weather, fires or floods. It is no longer unusual to see a TV reporter doing a live remote check their mobile device while reporting on a breaking news story.

“I get some awfully wonky press releases,” Bellamy, the radio reporter, told the NWPPA conference attendees. “Please make every effort to use layman’s language. And when you quote someone in your news release, please have them available when the release goes out, in case I want to get a few sound bites.”

Bellamy also said it’s nice if a spokesperson is familiar with a reporter’s work before they pitch a story.

“The news business is a people business,” added Ben, the editor for Clearing Up. “I get a lot of press releases, but I don’t read most of them. For me, the best stories are nuts and bolts stories featuring people who are or will make a difference. Get me in touch with those people.”

And then, assuming you have staffed the person to be interviewed, get out of the way.