Organizational Change? Be Prepared to Communicate Until You are Blue in the Face 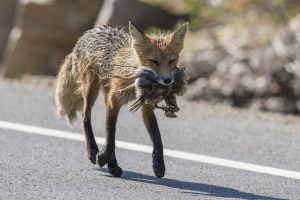 I’ve always loved the saying, “Culture eats strategy for breakfast.” I first heard it 20 years ago, in business school. Since then, I’ve been able to personally experience the truth of that statement, and I have spoken to innumerable people who have similarly experienced culture’s bite.

Whether it’s a leadership change, a reorganization, a merger, a shift in strategy or a technology platform upgrade, every important initiative must be sold on a retail basis, repeatedly, to employees. It’s a continual battle for hearts and minds. More often than not, strategy loses and culture wins, generally because of ineffective, insufficient or less-than-fully-honest communications.

That communication needs to flow in three ways: from the top down, from the bottom up, and from side to side. The leader may have a very clear idea of what he or she may want to accomplish, but it’s important to cultivate feedback from employees who don’t work on executive row. “Side-to-side” communications is the term I use for employees communicating with each other.

The utility business has had a spurt of mergers (and attempted mergers) recently. More may be coming. And it’s not just shareholder-owned utilities that are gobbling each other up. Publicly owned utilities (POUs) are increasingly getting into the merger game.

Denver-based consulting firm, the panel consisted of three oil-company CEOs: Brad Holly of Whiting Petroleum, David Keyte of Caerus Oil & Gas and Michael Land of Terra Energy Partners. She began by noting that many mergers are undone by clashes between the acquiring and acquired companies’ cultures. That’s certainly true in and out of the oil industry.

Expertly moderated by Elizabeth Coppinger (left), a director at Point B, she shared research from Harvard Business Review that companies that invest in employee engagement are four times more successful than companies that don’t make those investments. 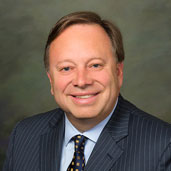 Brad Holly (right) told the conference there was no such thing as over-communications. “Our culture is the collective thoughts and knowledge of all our employees,” he said, adding: “If you take care of people, they’ll take care of the business. Employees are smart — they know if you care and they know if you don’t.”

At Whiting, Holly continued, “we’re trying to dismantle the ‘command and control’ approach to doing business. We need to lead differently than we were led. ‘People work’ is the most rewarding part of my week.”

“Culture is not a lake, it’s a river, always moving and changing,” Holly said.  “I can’t create the culture, but I can create the conditions under which culture can take root. People must be allowed to be themselves.”

Communications tip of the month: You can give your organizational change initiative a fighting chance to succeed with honest, continual and clear communications — about where the organization is going and how employees can help it get there. 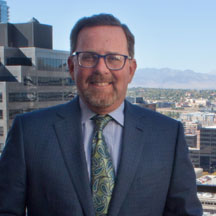 Seconding Holly, David Keyte (left) of Caerus Oil & Gas said, “Culture is a living, breathing thing. You need to keep your finger on the pulse of the organization. Employees are not sure the era of ‘command and control’ is over, but I am working to convince employees I mean what I say when I say we need an empowered workforce to succeed. Managing organizational transformation is everyone’s job.”

The three CEOs had a lot to say about communications as a tactic to manage the culture and reinforce the sought-after changes. “We are constantly communicating our values,” Keyte said of his company, which recently bought the Colorado oil & gas assets of another firm. “There’s been a loss of the small-company vibe in our Denver headquarters, and the new employees, located 200 miles away, are trying to get used to having new bosses.”

Added Holly of Whiting: “We’re over-communicating about our strategy. Sometimes it clicks the fourth time an employee hears it. Some employees have to hear it 12 times before it clicks. You have to communicate until you are blue in the face.” 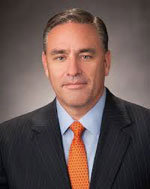 “You spend more time with people at work than you do with your family,” observed Michael Land (right) of Terra Energy Partners. “How we treat each other in the workplace is extremely important. No one is allowed to be a jerk.”

The executives agreed that investing time and money in organizational transformation is worthwhile, even necessary, as their companies and their industry go through momentous change. Organizational culture “is less tangible than some other things, but it sure is common sense,” commented Keyte of Caerus. There was general agreement that values-based businesses outperform businesses that are based on something other than values.

All of this may sound familiar to utility communicators. If your utility or electric cooperative is engaged in organizational transformation, and I can think of precious few that are not, remember to “communicate until you are blue in the face,” to use Holly’s term.

Succeeding in a turbulent industry, whether it’s oil & gas or electricity, is all about tapping into the collective smarts of your people. Call it “people power” if you want.

The Boston Consulting Group created the below graphic to show the importance of putting “people power” at the center of your organizational transformation. 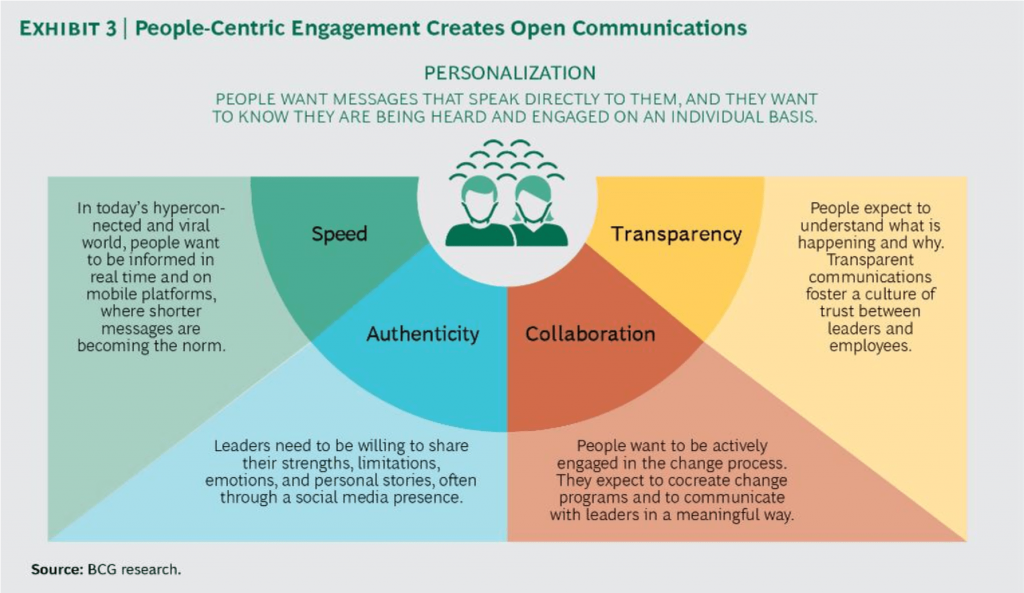 Organizational change is hard — for everyone. Many, if not most, change initiatives fail. Those that succeed have one thing in common: communications that are continual, consistent and authentic.

EEC is providing one utility with communications support to implement its organizational transformation. We’d be glad to help you with yours.

7 in 10 strategic initiatives fail. To increase the probability that yours will succeed, check out this article on Employee Engagement John wrote for Public Utilities Fortnightly. Read more >>