Celebrating a Milestone? Show Your Customers How Much You Care! 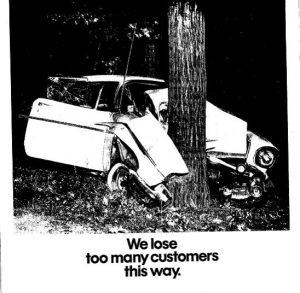 The ads still startle 50 years later. As recounted in Bill Bernbach’s Book, Mobil Oil was celebrating 100 years of operations in 1965. The company earmarked $1 million (a lot of money back then) to commemorate the occasion. The chairman of Mobil met with Bill Bernbach, the legendary creative director of the Doyle Dane Bernbach (DDB) ad agency to discuss campaign ideas. Mobil’s in-house marketing team had drafted a poster marking the event, but Bernbach had other ideas, bold ones, which Mobil endorsed. And so began one of the most effective campaigns in advertising history.

What happened in 1965 between an oil company and its advertising agency is very applicable to utility communicators today — particularly given that so many utilities are celebrating 75, 100 or even 125 years of service.

Rather than implement a self-centered campaign anchored by Mobil’s logo and the number of years it had been operating, DDB’s proposed a campaign called, “We want you to live.” It responded to growing concern among elected officials, law enforcement agencies and safety and public health professionals about the rise of dangerous driving on our nation’s highways. The U.S. interstate highway system was built in the 1950s, and drivers apparently were eager to test its limits — and theirs. The consequences were clearly visible: soaring numbers of highway accidents where excessive speed was a factor, rising citations for drunk driving, a large and growing number of people injured or killed by a motor vehicle. The highways were becoming unsafe.

Unsafe highways — or that perception — posed business problems for companies that sold motor oil and gasoline (as well as for companies that manufactured vehicles). But Mobil’s “We want you to live” campaign used daring, eye-catching art and crisp copy (below) to alert the public to the dangers of unsafe driving. DDB and Mobil didn’t flinch from showing these tragic consequences — lives blighted, property destroyed and potential wasted. 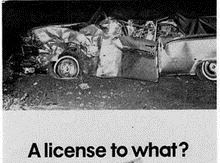 The ads also acknowledged that a company that sold gasoline and motor oil had a business interest in preventing auto accidents and unsafe driving. The headline of one ad read, “Please don’t get killed this Sunday. We’d like to sell you gas on Monday.” That frankness helped establish Mobil’s credibility.

The campaign was a smashing success. Even though Mobil included no commercial pitch in the ads, it received tens of thousands of letters thanking the company for its stance and requesting a credit card application.

Why is Mobil’s “We want you to live” advertising campaign relevant to utility communicators? Mobil executives felt strongly about safe driving practices. They were deeply alarmed that a rising number of drivers and pedestrians were getting hurt or killed by easily preventable accidents.

Electric and gas utility executives feel just as strongly about the safe use of their product. But there has been a generalized inability to convey that concern in a memorable, creative way in print advertising. In fact, utility print safety ads are the place creativity generally goes to die.

Communications tip of the month: If you want to break through to your customers, consider breaking the mold. Go outside your comfort zone. Create art that startles. Use fewer words. Don’t be afraid to show readers what can happen if they fail to use your product safely. Remember, you’re doing it for the right reason – you want your customers and employees to live!

Boring, copy-heavy ads will be disregarded by the public — regardless of the merits of the issue or copy. What made Mobil’s campaign so successful was the boldness of its art: cars wrapped around trees, chalk outlines of dead pedestrians, skulls, graveyards.

You will not find that boldness in utility print safety ads. E SOURCE, a former employer, maintains a database of utility ads on a wide range of topics and in a range of formats. E SOURCE generously allowed me to access that database, AdVision, which contained several dozen utility print ads on safety. The Xcel ad shown here was the best of the bunch in terms of visual attractiveness — as in, this is an ad I might read before turning the page. Other than this ad, there was nothing I would characterize as visually arresting.

But utilities can do far better — and should. After all, outlays for safety ads typically are recovered from customers in electric and gas prices. So why wouldn’t a utility want to do its very best and put together memorable print ads on a topic it cares so deeply about — and which are being paid for by its customers?

The reason often comes down to unwillingness to startle and resistance to anything that might be viewed as too graphic or ghastly by its intended audience. Which is why so many utility print safety ads are so boring. After a while, you may ask yourself, “How many people are killed or injured each year by boring utility safety ads?” The answer: nearly all of them

The most compelling print electric safety ad I have seen is this one, developed by the Energy Education Council and featuring a fellow named Shawn Miller. The copy points detail how Shawn agreed to give his mother a hand stringing holiday lights. But he didn’t pay enough attention to his surroundings: When tossing a set of holiday lights into a tree, the lights made contact with an electric line. Shawn suffered 27 exit wounds and had to undergo 31 surgeries, but he still lost his left hand and one of the fingers on his right hand. Take a good look at the photo — and the video. They show in clear, moving and effective ways what happens when people aren’t safe around electricity. They are explicit without being exploitative.

The Energy Education Council is a non-profit organization whose members include utilities, educators and others committed to outreach and education on safety, efficiency, and renewable energy. Their resources include news releases, professionally designed consumer materials, a photo library of more than 2,100 images, television and radio PSAs and much more.

“Safety advertising and messaging is a natural for utilities,” Molly Hall, the group’s executive director, told me at an industry conference. “Most accidents have tragic outcomes and the vast majority of these incidents are preventable. You don’t want to unduly alarm people about electricity or natural gas. But the power of these energies must be respected or the consequences can be deadly. And utilities need to find ways to break through the message clutter. If you don’t capture the consumer’s attention, the message is lost.”

After working with one utility client on safety communications, I came away with a renewed appreciation for the importance of safety to a utility’s core business. Utilities, like Mobil Oil, want their customers (and employees) to live. That being the case, why wouldn’t you want to use every tool at your disposal to make that happen? What if it was your spouse, sibling or child whose life and livelihood depended on your art and copy?