Speak Up! What Do You Stand For?

Two sayings — “If you don’t stand for something, you’ll fall for anything” and “an educated consumer is our best customer” — ran through my mind recently as I listened to a panel discussion at a conference organized by the American Public Power Association (APPA), of which I am an associate member.

The panel focused on the need for publicly owned utilities to have a distinct brand. Market research conducted in 2016 by APPA showed a majority of public power customers did not know they were served by a locally owned utility. In fact, 4 of 5 customers under the age of 55 were not aware they were served by a community-owned, not-for-profit utility. The percentages increased only slightly for public power customers over the age of 55.

In fact, there was considerable brand confusion among customers served by public power, as this pie chart illustrates: 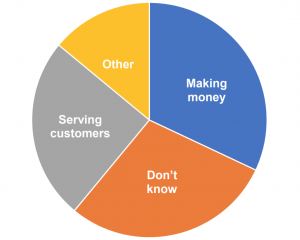 So what, you might be thinking. Why should customers care whether their electricity comes from a public power utility, an electric cooperative, a shareholder-owned utility or the man in the moon?

Ever since electric restructuring reared its head over 20 years ago, marketers and analysts (myself included) have been urging electricity providers of all stripes to have a distinct and differentiated place in the market and in the minds of their stakeholders. Think about the world’s most successful companies, like Apple, Amazon, Starbucks or Coca Cola. When you say their names, specific and unique attributes come to mind.

In a research report on utility branding I wrote for E source many years ago, I emphasized the importance of electric companies having a clear and distinct set of meaningful attributes, or brand:

“A brand is the unique set of characteristics that a company can use to differentiate itself from rivals in the minds of critical stakeholders such as customers and employees. Stakeholders inevitably develop images of and associations with companies, so businesses have a vested interest in actively and positively managing those images and associations. Branding is longitudinal in nature: It requires time, effort, and money, though not in equal measure. Companies must configure and align their operations to continually deliver on brand promises.”

Brand Must Connect with Target Audience on Multiple Levels

Years ago, a Boulder-based advertising and marketing firm, Sterling Rice Group, created a “brand consciousness” model (below) showing how brands interact with consumers on three levels — emotional, functional and intellectual. I believe the model is still valid. 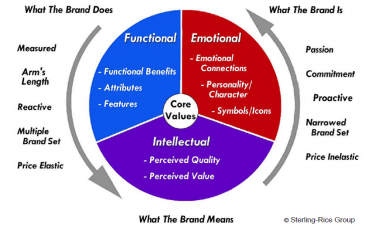 POUs are Getting Unsolicited, Unfriendly Offers

Public power utilities and electric cooperatives, these days collectively known as publicly owned utilities (POUs), have long been assumed to be immune to mergers or takeovers. Since they don’t have shares of stock, how could another party gain control over them?

In Colorado, my state, an electric cooperative is trying to merge with a nearby public power utility while a cooperative generation & transmission organization is trying to merge with a public power joint action agency. And, in the past, members of the Colorado Springs city council have investigated the sale of the city’s four-service utility, Colorado Springs Utilities.

That’s just in Colorado. Farther afield, the city of Vera Beach, Florida, sold itself to Duke Energy, largely as a way to get the utility’s debt off the city’s books.

“We are going to invest in about $15 to $20 billion in municipal utilities throughout the Southeastern part of the United States,” Bernhard said. Bernhard Capital Partners would manage public power systems through a subsidiary called NextGen Utility Systems.

Below is a map of the public-power colossus Bernhard envisioned creating: 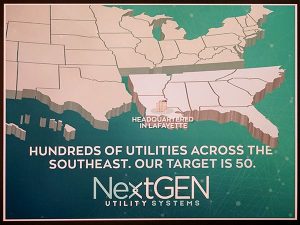 Utilities Must Find Brand Attributes that Resonate with Their Audiences

If nothing focuses the mind like an execution the next morning, you could say the NextGen proposal should awaken in POUs the need to take seriously the importance of conveying, over and over, a clear, distinct and well-understood set of meaningful attributes that are conveyed to your customers or members.

That doesn’t mean you need to push out oodles of press releases about local ownership. But it does mean operationally delivering on whatever promises you make, whether it’s lower prices, giving back, transparent decision-making, higher reliability, local control, friendlier service, to name a few. Those are the brand attributes that resonate with your customers (or members).

If a suitor shows up, unannounced and unwelcome, with a big check and plans to privatize a POU, that transaction will have to be approved by the authority governing the POU — generally either a city council or an elected board of directors. Having a reservoir of good will among the customer-owners (or members, in the case of cooperatives) can be an invaluable tool in fighting an unwelcome transaction.

Communications tip of the month: Having brand attributes that are meaningful to your audience is essential as the electricity business continues changing.

That appears to be what happened in Lafayette, Louisiana. Last November, after months of uncertainty, the city council voted to oppose any transaction that would cost the locally owned utility its independence. Community support, voiced during the hearings to consider a transaction, appears to have had an impact on the city council members.

A November 5th article from Public Power Daily included this: “Another speaker said that she ‘has been involved in this community for over 50 years and for all those years that I’ve been in Lafayette or involved in the community, the one constant has been the shining jewel in the crown of Lafayette and that is our utility system.’ ”

Really, at this point, for electricity companies, it’s almost become a case of pick your poison. And the best inoculation against a wide variety of poisons is having a strong, relevant brand that resonates with your customers (or members).

For an electricity company, no matter its ownership structure, keeping its head low and hoping that strategic change will not find it is a recipe for disaster. It’s time to get serious about branding. Either that or consider the many ways you may be forced to turn over the keys to someone else. 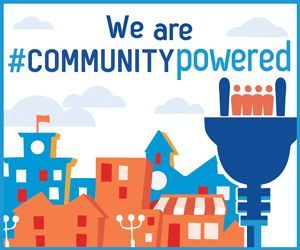 Recognizing that many of its members are small, with scant resources for a communications or marketing staff, APPA has done a lot of the heavy lifting for its members. It created a website, website resources (left), infographics and social media resources, including a hashtag — #communitypowered — to help members spread the word. As well, they have created seasonal-themed art (below) for use by their members. 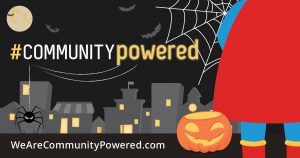 APPA’s call to arms is simple and straightforward: “Public power is community power. That means the decisions about how the electric utility is run are made by people who live and work in the community, not corporations. Public power utilities are rooted in and committed to the communities they serve, and invest revenues directly back into the community.”

Consider the Non-Price Attributes of Your Brand

As a general matter, I believe it’s fine to use your lower prices as one of several attributes that could position you favorably with your stakeholders. But I believe utilities need to try to cultivate non-price reasons for attraction as well. “Cheaper than the other guy” might be true today, but what happens if conditions change? Wal-Mart is about the only entity I know of that has staked out that claim, and delivered on it, for decades.

I have long admired the brand promise offered by OUC, the Orlando Utilities Commission. Its tagline (right) offers a promise that is clear, distinct, and not based on price. Electric reliability is a distinction with a difference, one that is easily understood by its customer-owners. And OUC has delivered on that promise for over 15 years, as shown by state outage statistics.

The competitive environment in which electricity companies operates is undoubtedly changing. Many of those changes are not welcomed, either because they would require investments or result in operational limits being imposed by external parties. No matter the threat, having a strong, meaningful bond with your customers, owners or members is an essential part of answer.

Remember: Teams that try to win by playing defense almost inevitably end up with losing records.