Environmental Communications: When Green is the New Black 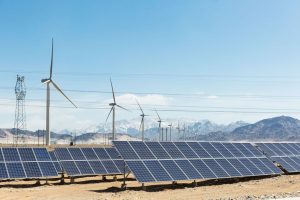 In recent years, a growing number of electric utilities have added “sustainable” or “environmentally responsible” or “cleaner” to their longtime vision of providing electric service that is safe, affordable and reliable. That’s one part of their response to a shifting market. Even utilities operating in traditionally regulated monopoly markets, where there is no threat of losing customers to a competitor, have started paying more attention to their environmental communications.

The U.S. Energy Information Administration late last month released a study that showed over 546 coal-fired power plants with combined generating capacity of about 102,000 megawatts (MW) have been retired over the last decade (see chart below). Operators intend to close another 17,000 MW or so by 2025, EIA said.

Asset owners have retired about 33% of the overall coal-fired generation fleet over the last decade, a number that EIA expects to continue growing through 2025. A lot of that lost coal generating capacity has been replaced either by non-emitting generation like wind or solar, less-emitting generation powered by natural gas or an increase in customer programs like energy efficiency, demand response and the like.

Now and again, I have blogged on utility environmental communications, like here. Last year I wrote an article on the growing number of publicly owned utilities that have committed to providing 100% renewable (or carbon-free) power by some specific date.

Environmental Communications: As Your Market Turns …

So, as the business reality in which utilities operate is changing and will, in all likelihood, continue to change, utility communications also must change.

There are plenty of organizations in the electricity business that have opposed these changes, but now even longtime doubters are coming around, driven by the changing economics of electricity production (and conservation) as well as shifting customer/member/owner/stakeholder requirements and expectations. Finding a defender of coal-fired generation these days is about as easy as finding supporters of teen vaping.

It was my good fortune earlier this summer to listen to several speakers on utility environmental communications at conferences located a half-mile apart in Austin, Texas: the national conference of the American Public Power Association (APPA) and the annual conference of Utility Communicators International (UCI). 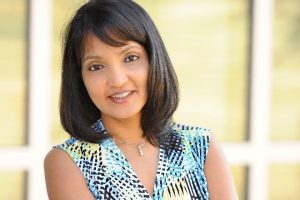 Meena Dayak (left), APPA’s vice president of integrated media and communications, got the ball rolling by citing market research from the Pew Research Center (below) that 59% of Americans say global climate change is affecting their community. Nearly half of those surveyed said effects are evident in changes to the weather, including increasing frequency of severe storms, droughts, floods, and wildfires. 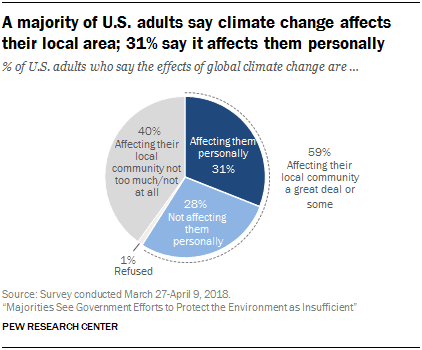 She spoke in early June as Austin was broiling, with unseasonably high temperatures in the upper 90s.

“Millennials, even those that identify as Republicans, are less inclined than older generations to support increased use of fossil fuels to generate energy,” she said. Around the world, 67% of consumers — across age and income groups — now buy based on belief,” she continued, citing research from the 2018 Edelman Brand Study.
Meena then referenced a blog post from CHARGE Energy: “In some ways, green and renewable is no longer an added value for brands but a requirement in the minds of consumers.”

To communicate concern for the environment, public power utilities must reiterate their roots — as community-owned utilities that respond solely to customer preferences — and educate and engage customers, advised Meena. Two-way communications, and getting customers to do their part, are important.

As consumers increasingly expect their electricity to be environmentally benign, as well as safe, reliable and affordable, utility communicators need to create a new storyline.

Communications tip of the month: Anchor your environmental communications in reality. If you don’t have a pristine track record (and what company in our industry does?), you should emphasize what you’re doing to reduce damage to the environment. Process stories can be very engaging! 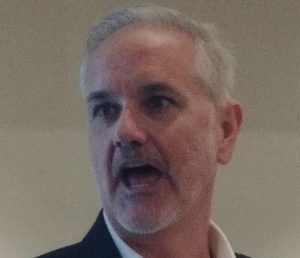 Start with the truth. “You can’t fake da funk,” Bill Coletti (right), founder and chief executive at Kith, an Austin-based reputation management firm, told the APPA conference. “But if you are doing the right thing, then you should inform, cajole, engage and energize your employees so they can help (the communicators) tell your story to your customers and other stakeholders.”

“A company may own its brand, but the public owns its reputation,” Coletti reminded the audience. 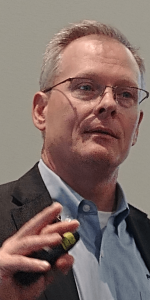 Steve Roalstad (right), communications and marketing manager for Colorado’s Platte River Power Authority (PRPA), a joint action agency, began his APPA talk by noting that reliability and low prices are basic table stakes, meaning you don’t get any credit for having them, but you do get penalized by the public if you don’t.

“If you have high reliability and low prices, there’s a 20% to 30% greater likelihood the news media will cover your environmental initiative,” he commented.

PRPA’s story was a “process” story, meaning the agency wanted to take its stakeholders behind the scenes and show them how it was enacting changes that responded to their expectations.

The first step, he said, was to shift the conversation by showing stakeholders, including the news media and employees, that PRPA had been investing in clean generation like wind and solar. The second step was to engage with the community on these new resources and the agency’s overall strategy to clean its generation portfolio. Roalstad said a key in telling this process story was showing where PRPA had been, and where it was going, in terms of the role non-emitting generating resources played in the agency’s resource mix (below).

Through a lot of hard work and message discipline, the narrative switched from PRPA as a “coal-fired” agency to one that tripled its wind generation and was seeking to make it generation portfolio 100% carbon free by 2050.

“Don’t be afraid of making bold statements, providing you can back them up,” Roalstad advised his APPA attendees.

As the drumbeat about environmental protection grew, PRPA conducted some market research to see how the agency’s reputation was changing in the public’s mind. Customers continued to associate PRPA with high electric reliability and financial prudence, but “environmental responsibility” emerged as a newfound aspect of the agency’s reputation. Roalstad estimated that the environmental communications campaign, which took place over about 18 months, generated about $500,000 in positive news coverage for PRPA.

One of the side benefits of having a more favorable reputation on the environment is that PRPA finds it easier to recruit new employees who value environmental protection. And being seen as an environmental good citizen helped the agency recover faster from an unfavorable event.

What I heard at this APPA panel certainly would have been enough for one blog post, but coincidentally, about a half-mile away, the Utility Communicators International (UCI) was holding its annual conference. One of its speakers, Carolyn Parrs, founder and chief executive of Mind Over Markets, was talking about … you guessed it … environmental communications! 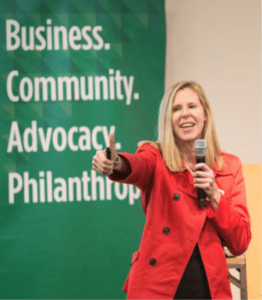 Parrs shared her view that now is the time for utilities to own their sustainability story by speaking boldly, engaging stakeholders, inspiring investors and claiming their competitive edge. She cited research from consumer product giant Unilever, which estimated that the market for sustainable goods is currently $2.65 trillion, and that there’s up to $1 trillion in value up for grabs for companies that can effectively communicate their products’ sustainable attributes.

Mind Over Markets, a creative brand messaging and design agency, works with companies in various industries, including the electricity industry, to uncover and promote their environmental stories.

For utilities, Parrs said, that could include new electric sales from electric buses and electric vehicles. Utilities wishing to sell or facilitate the installation on distributed energy resources (DER) or battery energy storage systems on customers’ premises could generate reputational gain as well as revenue from these new sustainably minded services.

She has a four-step process to uncover and tell your utility’s environmental story:

Parrs shared a landmark case study about Public Service Company of New Mexico’s sustainability journey. Recognizing that the world was changing, and the old ways no longer worked, PNM pivoted to listening, collaborating and changing internal viewpoints, which resulted in passing historic legislation and becoming the first investor-owned utility in the country to commit to 100% carbon-free emissions by 2040.

From my communications work with utilities, I’m not aware of many utilities that have walked the path PNM walked. I believe more should think hard about starting their journey.

Organizations whose environmental communications fail to meet the expectations of its critical stakeholders — including customers, customer-owners, members, communities, investors or regulators — will incur reputational damage as well as risk reversals in any endeavor that requires stakeholder support.

WHEN YOUR COMMUNITY WANTS RENEWABLES

“From finding ways to acquire power from renewable sources, to purchasing offsets and ensuring the proposed plan aligns with community expectations, public power utilities are working to figure out how pursuing or committing to increased renewable power can be viable for the communities they serve.”
Read More…