Earning, and Keeping, Your Company’s Social License to Operate 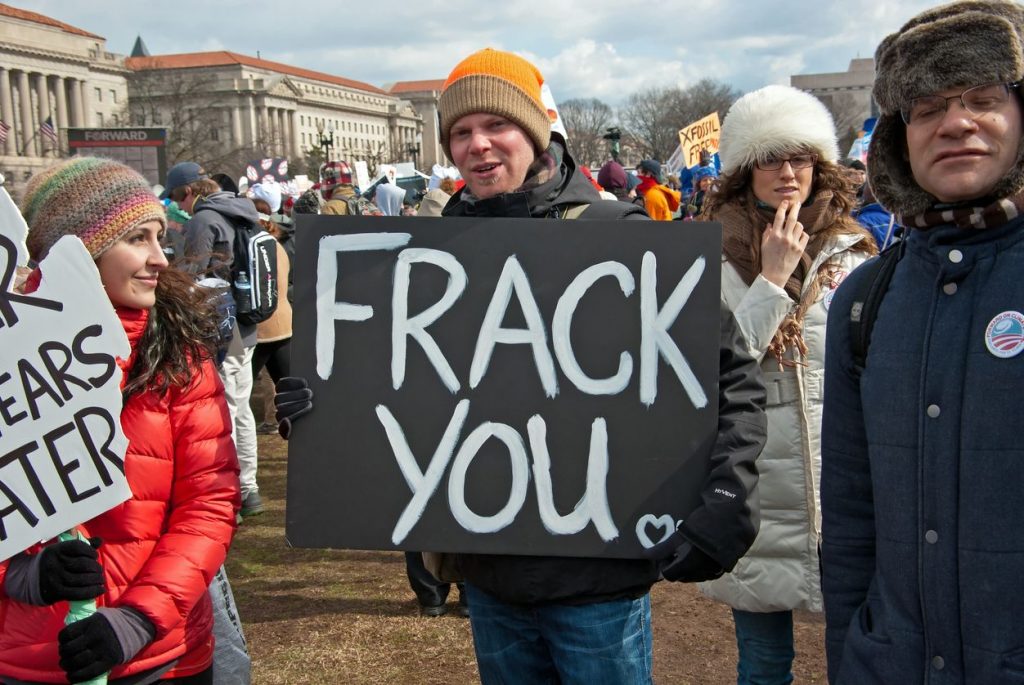 April 16, 2019 was the day that social license to operate (SLTO) became real for Colorado’s energy companies. That’s the date that Colorado’s governor signed into law Senate Bill 181, which is transforming the business environment for Colorado oil & gas companies.

If you wanted to quibble, you could say the date SLTO became real was November 8, 2018, when a Blue Wave hit Colorado and voters elected a Democratic governor and Democratic majorities in both the state House and Senate. Previously the legislature had been split, with Democrats controlling the House and Republicans in the majority at the Senate. Divided government had for years prevented any bill perceived to be a threat to the oil & gas industry from being passed.

All that changed when the Blue Wave hit Colorado. There are important lessons for all energy companies operating in any state. SLTO is an important force, and some companies, to their regret, only recognize that after the fact.

The points I make here apply equally to all companies, in and out of the energy business. I have blogged about the importance of energy companies’ cultivating better relations with its stakeholders as a means of securing SLTO. Like here. And here. And here.

These days, stakeholder pushback is not limited to the extraction or transportation of oil or natural gas, or the generation and transmission of electricity. Mining companies and beverage companies have experienced expensive reversals over SLTO in overseas countries.

Closer to home, some U.S. electricity providers pursuing renewable energy projects like windfarms have experienced community opposition, which may be hard to understand: They may wonder why stakeholders oppose their efforts to build more renewable energy sources. Isn’t that what they have asked for? 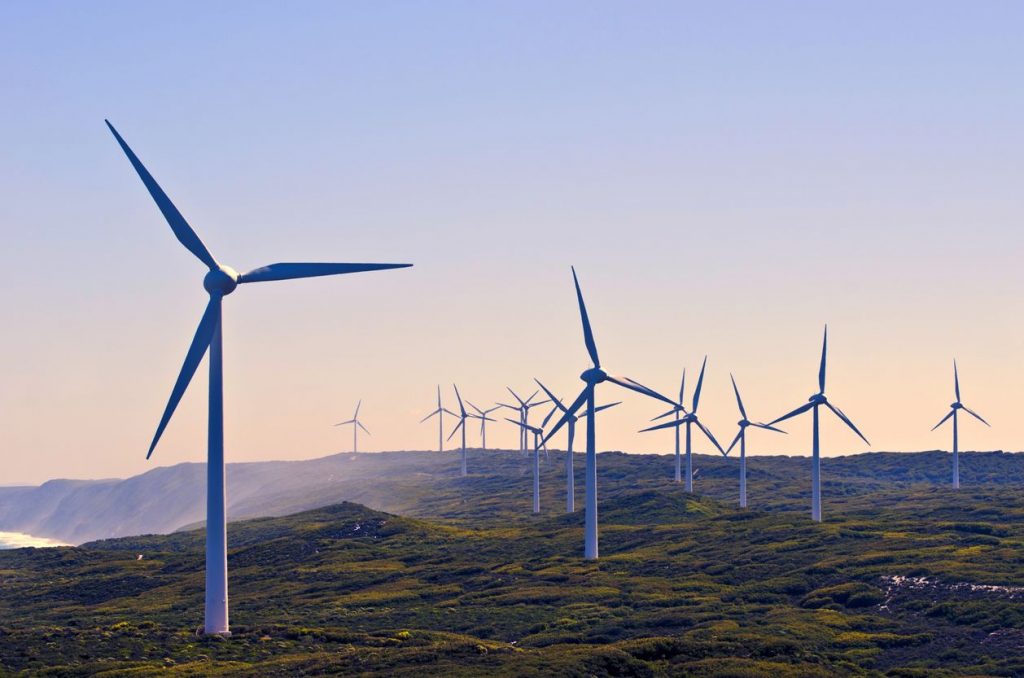 Yes, renewable energy is popular. But more than clean energy, stakeholders want to be active and substantive participants in determining their economic fate as well as the quality of their air, water and land. No longer are they content to be a procedural “check the box” step on a company’s way to the regulatory commission. And social media gives the proverbial Davids a powerful advantage over corporate Goliaths. Don’t forget who won that Biblical battle. 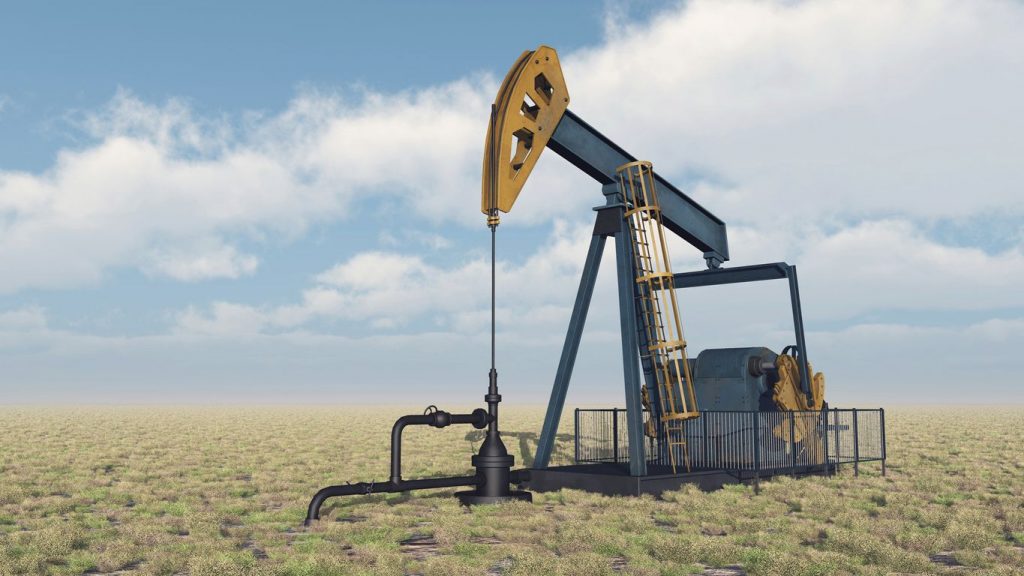 SLTO Storm Clouds Have Been Visible for Years

You can’t say Colorado’s oil and gas producers were not warned about SLTO. For several years before last November’s elections, the state’s oil & gas trade organization, the Colorado Oil & Gas Association (COGA) held conferences featuring one or more CEOs who urged member companies to engage more deeply with stakeholders. I have covered at least five of those annual conferences for a journalism client.

Typically, there has been general assent to what the CEOs said. Oil & gas company representatives I spoke with at those conferences, said, in essence: Yes, of course, we need to more actively tell the Colorado oil & gas story. It’s absolutely on our “to do” list. No doubt. 100%.

But nailing down the “when” proved to be elusive. “We’re on it,” the officials I interviewed said. But stakeholder engagement would have to wait until after they finish telling their story to Wall Street, complete lobbying at the state and federal levels and finalize the revamping their supply chain. Of course, then there’s the umpteenth organizational revival that needs to be managed, and an asset sale after that. But don’t worry: We believe in stakeholder engagement and we’ll get on it as soon as we can. 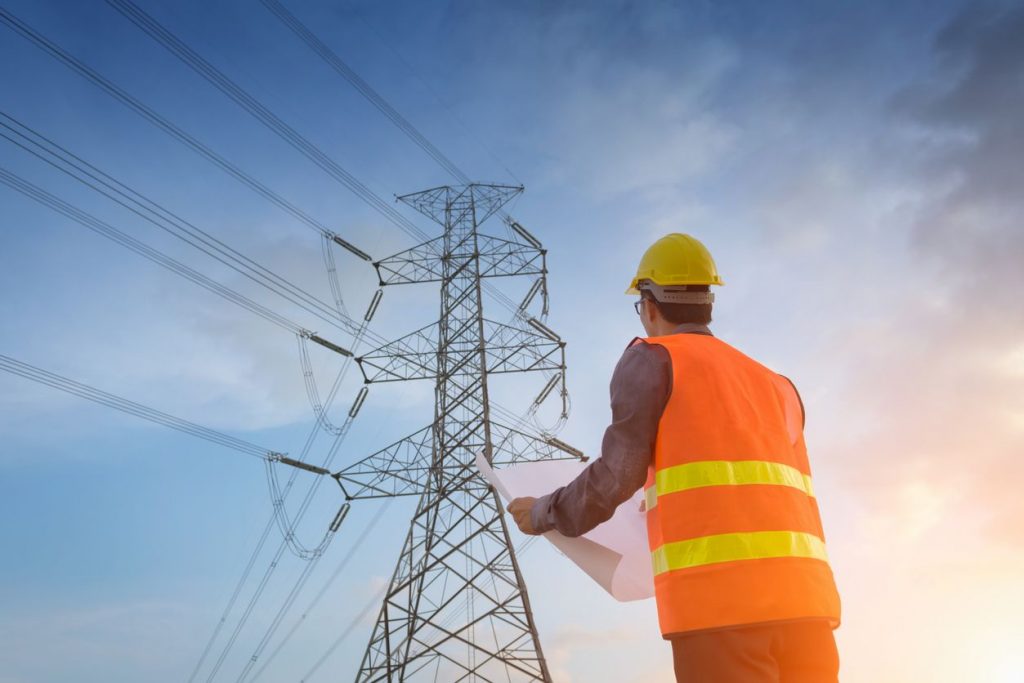 SLTO is the Ultimate Long Game

If energy companies put stakeholder engagement near the end of a long list of other strategic “must do” items, that virtually ensures it will never receive serious executive-level attention.
Why? Because, depending on how you define and pursue “stakeholder engagement,” it can be:

From an “efficiency” standpoint, i.e., outcomes secured for dollars invested, energy companies may think it makes more sense to play the “wholesale” game by marshalling their resources at the state and federal legislature and regulatory commissions to try to stop unwanted laws and regulations. That’s where the big bucks can be won or lost.

That’s the way energy companies have done it for 100 or more years. And they have a pretty good track record, so much so that economists have coined a term for it: “regulatory capture,” which is what happens when a regulated company is able to overwhelm the panel that regulates it because it has deeper pockets. It can hire more and better lawyers, economists and consultants than a government agency.

Communications tip of the month: Social license to operate shapes an energy company’s risk profile. Operating in a given community is a privilege, not a right, and it can be revoked at any time. Energy-company communicators and marketers should continually work to win and preserve their company’s SLTO. Remember, actions speak louder than words!

So, energy company leaders may be thinking, why not go with a strategy that has produced acceptable results for over a century? Maybe SLTO is a passing fad, the flavor of the month, an overblown threat from consultants looking to drum up new business.

News flash: SLTO is not a fad, and it is having an impact on energy companies — oil & gas producers as well as providers of electricity and natural gas. That impact, in terms of abandoned or delayed projects, re-routed infrastructure, added legal and financing costs, reputational damage, stock price declines, flagging employee commitment and the like, probably totals billions of dollars. 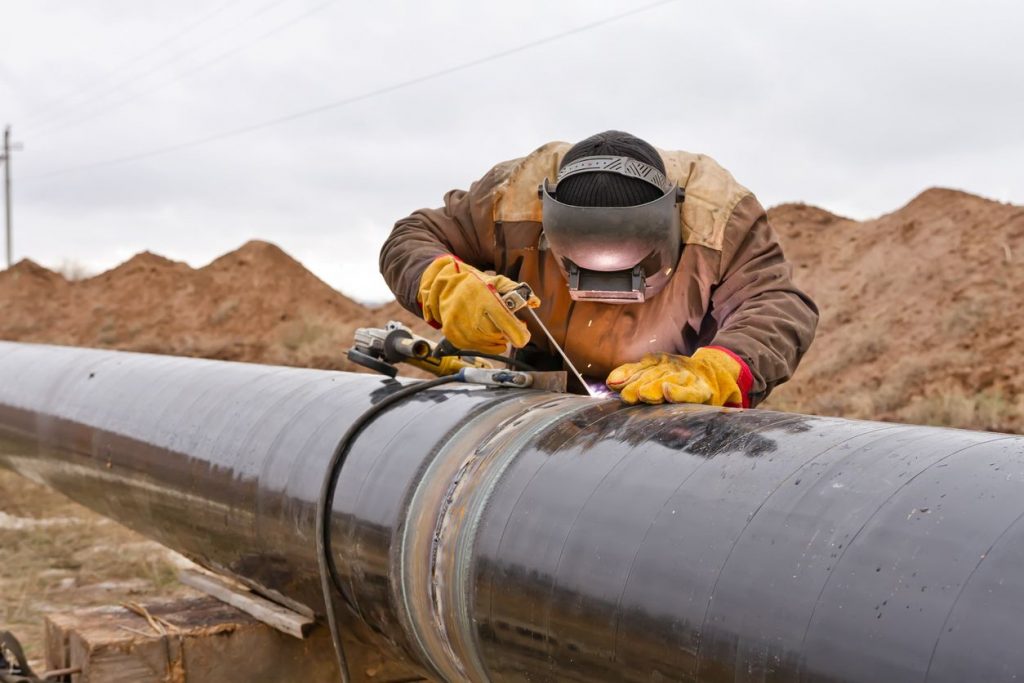 While I understand, and to some degree agree with, the traditional “wholesale” approach to stakeholder engagement, I also believe the game is changing. The rise of social media has changed the way the stakeholder engagement game is played. No longer is the circle of critical stakeholders limited to the state legislature, the applicable regulatory agencies, the governor’s office, investors, Congress and the courts.
In my state, I have seen energy companies lose the ability to make a first impression on the persuadable portion of the public, the so-called “movable middle.” The Colorado oil and gas industry last year spent tens of millions of dollars defeating a ballot initiative that would curtail their operations. But the state’s voters, concerned about noise, dust, road damage, clean air, clean water and local control of business activities in their communities, elected a Blue Wave, putting the industry, once again, on the defensive.

Winning, and Keeping, Your Social License to Operate 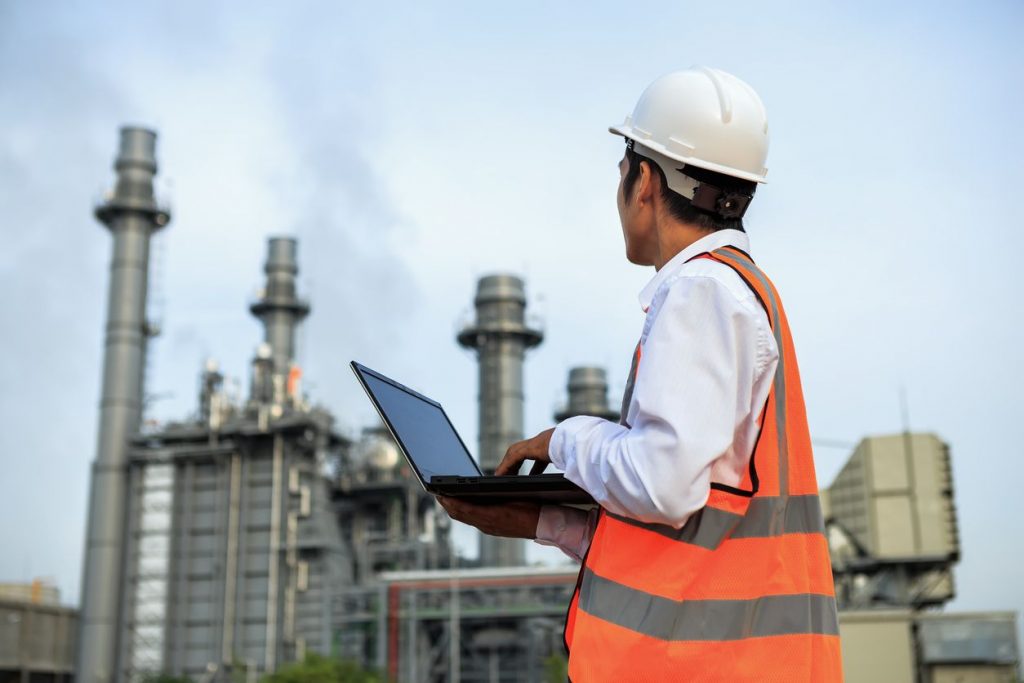 As a general proposition, it’s far easier and cheaper to cultivate stakeholders and secure your SLTO before opposition to a project develops. Once the protestors appear in front of a worksite or at the corporate headquarters, the costs start shooting up. Some costs can be more easily measured than others. Ask any company that has had its nose bloodied in a SLTO skirmish, it’s harder to win when you play defense.

So how does your company go about winning, and keeping, its social license to operate? It’s not a huge mystery, but neither can it be accomplished with a one-size-fits-all, cookie-cutter five-point plan.

That said, here are some specific recommendations: 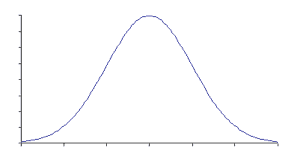 Securing your company’s SLTO really comes down to winning the benefit of the doubt. As with many things in life, a community’s views will be distributed along a bell-shaped curve: A certain small percentage of people feel strongly about you or an issue, but the majority of people have not made up their mind. They are the persuadable portion of the public.

This may sound hopelessly naive to some, but I believe if you treat your stakeholders well, and honestly work to meet their concerns, they’ll be there for you. They may not agree with every decision you make, but if you explain your reasoning, and seriously consider their input, you will win and protect your SLTO.

Telling Stories to Engage Your Customers 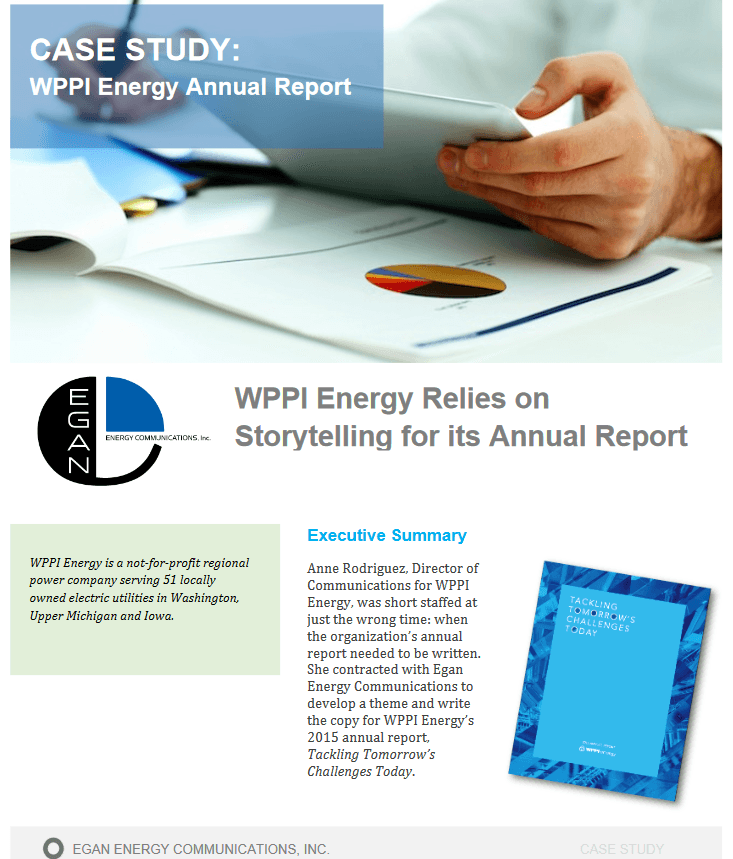 “One way for energy companies to start engaging with their customers is to talk to them, and then feature them in their official company publications like newsletters, the website and annual reports. EEC did that in an annual report we wrote for WPPI Energy, as we have for other clients.”
Read More…